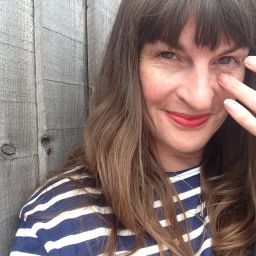 Copywriter Katherine Wildman features a wealth of talented creative folks on her blog, The Writing Desk. Here she shares the interviews with Converge. 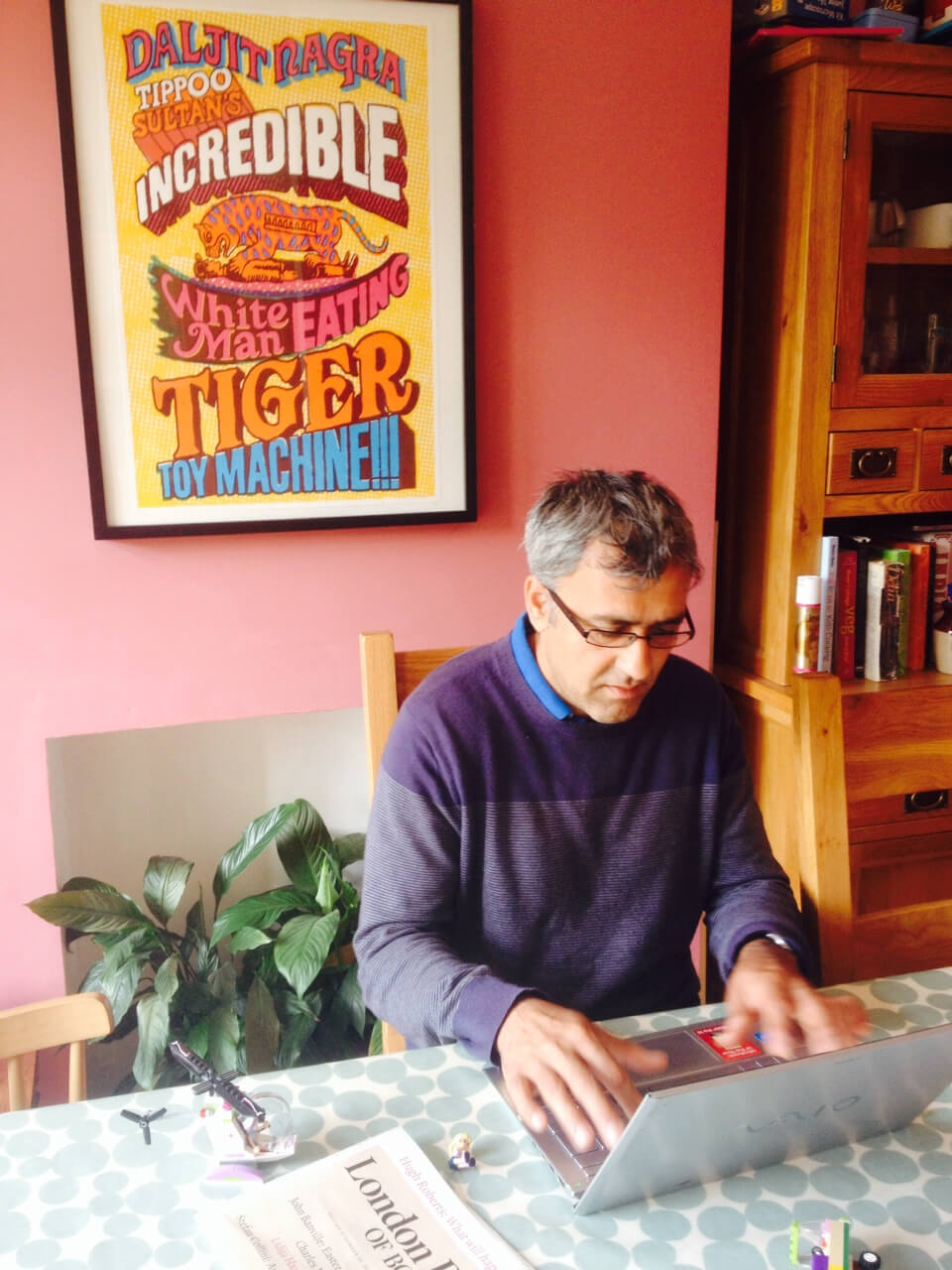 Here’s the part where we’d sit down and try and look comfortable next to the microphones. Are you sitting comfortably? Then let’s begin…

CAN YOU NAME THE BUSINESS BOOK THAT’S ALWAYS ON YOUR DESK? (I’M TALKING ABOUT THE ONE THAT’S COVERED IN PENCIL MARKS, COFFEE STAINS AND HAS TURNED DOWN CORNERS…)

The Princeton Encyclopedia of Poetry is serious business and has helped me out of many indigent moments.

The Benetton advert where Pope Benedict XVI and Imam Sheik Ahmed el-Tayeb are having a pre-coital snog.

“EVERYONE HAS A BOOK IN THEM…” OR SO THE SAYING GOES. WHAT DO YOU THINK/KNOW/BELIEVE IS THE SECRET TO GOOD WRITING?

The ability to excite yourself while writing.

IF YOU WERE JUST STARTING OUT, WHAT ADVICE WOULD YOU GIVE YOURSELF? WHICH BOOK OR BOOKS WOULD YOU READ FIRST?

I wouldn’t read books anymore. I’d get my poetry out there and seek feedback on my work and distrust anyone who says, ‘Yeah, that’s an amazing poem, man. You’re a genius.’

SILENCE? RADIO? OR MUSIC WHILE YOU WORK?

I’m incapable of writing poetry without playing a Sonos and a Spotify of rock music. Bands such as Arctic Monkeys, Paul Weller, The War on Drugs, Mac De Marco get my heartbeat accelerated.

WHAT ARE YOUR TOP THREE NOVELS OF ALL TIME – AND WHY?

I don’t like novels because they go on for too long and are usually tedious and anticlimactic. Poetry books I like include Milton’s Paradise Lost, Heaney’s Seeing Things and The Selected Poems of Les Murray. Pooh to prose!

WHAT’S THE BEST THING YOU’VE EVER WRITTEN? WHY DID IT ROCK YOUR WORLD?

My poem, Look We Have Coming to Dover! won a big national prize and is now taught at A’ Level. It’s a linguistically mishmashed poem that celebrates the English language as a migrant project whilst also praising the arrival immigrants into Britain. When I first started writing poetry I could hear the music of this poem in my head but never imagined I’d make a poem from it. So that’s why it rocks not only my world but my immigrant world!

WHAT’S THE LAST THING YOU BOUGHT? AND YES, THAT PACKET OF CHEWING GUM COUNTS.

A large tub of Kelly’s raspberry ice cream from Waitrose to confirm my mundane middle-classness.

WHO WAS YOUR TEENAGE CRUSH?

An Indian actress called Rekha. I remember her somber looks, her long mustard-oiled black hair, her dark austere complexion, her wide hips, her strong neck and her enormous chest!

DESCRIBE THE BEST MEAL YOU HAVE EVER EATEN.

Whatever my wife cooks whenever she cooks is always heavenly.

The second bottle of Prosecco.

IF I WERE TO GIVE YOU A PRIVATE JET, DAVID ATTENBOROUGH AS A TOUR GUIDE AND A MONTH OFF WORK – ALL EXPENSES PAID – WHERE WOULD YOU GO AND WHAT OR WHO WOULD YOU WRITE ABOUT – AND WHY?

I would sit in a café on the ski slopes of Austria. I don’t ski but I like to look out at the scenery. I would write a verse novel about the joy and gratitude of being alive; I would demonstrate this through a love story.

WHAT’S IN YOUR POCKETS?

I used to carry a rune symbol inscribed on an indigo stone which was given to me as a token of good fortune. A few weeks after carrying it about with me Faber & Faber took my first poetry collection. Before that, I used to carry cardamoms in my pocket as emergency mouth fresheners. As for now, there is nothing in my pockets.

PEN AND INK, PENCIL AND PAPER OR KEYBOARD AND SCREEN? WHAT’S YOUR WRITING STYLE?

Always scrap paper and a black Bic pen first. These are the tools of the proletariat poet!

DO YOU READ ANY BLOGS OR MAGAZINES ABOUT WRITING? (AND I MEAN READ, NOT JUST SUBSCRIBE TO AND DELETE/LEAVE ON YOUR DESK AND RECYCLE?)

I read poetry magazines such as Poetry Review and Poetry London because they have good poems and reviews.

Graft. I like it’s various meanings and global implications.

YOUR MOST LOATHED WORD? (YOU KNOW, THE ONE THAT MAKES YOU SHUDDER AND SAY “EW!”?

Many poems have words such as translucent and iridescent and they make me go Ew!

WHERE CAN WE FIND YOU? – BROWSING ONLINE OR LOST IN THE AISLES OF A BOOKSTORE?

LRB bookshop near the British Museum is the best bookshop in the world and it has a superb café as well. They don’t sell populist books and they take their books very seriously. I visit this shop every week.

FAVOURITE SONG LYRIC OF ALL TIME? AND WHY?

That’s Entertainment by The Jam. It charts with remarkable warmth our urban despairs and affections.

NAME THE ARTIST WHO IS GUARANTEED TO GET YOU UP ON THE DANCE FLOOR.

Jewish wedding music. I love the communal hands-holding in a circle and running in and out going ‘whoah’.

WHAT ARE YOU WORKING ON TODAY? WHAT’S IN THE PIPELINE?

A book of poems titled British Museum which explores Britain’s place in the world.

WHAT PIECE OF ADVICE REALLY CHANGED YOU AS A WRITER?

Why don’t you have a go?

WHAT WAS THE LAST THING YOU WROTE THAT HAD NOTHING TO DO WITH YOUR JOB?

A target for my two young daughters over the summer hols is chalked on our kitchen black board, ‘Splits’. They both want to achieve a full splits before the end of the summer holidays and we are currently at the start. The word is a reminder to try the splits every day.

The Complete Works of Laurel & Hardy, The Bollywood film, Sholay, and the Three Colours Red are all my equal favourites.

WHICH BOOK OR BOOKS IS/ARE BY YOUR BED TODAY?

The Complete Poems by Czeslaw Milosz, and Flaubert’s Sentimental Education (though I don’t like novels!).

WHO WAS OR IS YOUR GREATEST TEACHER?

Ms. Strachan my CSE History teacher. She knew we were a class of morons yet she gave us her best effort and believed in us. I got a CSE grade 1 because of her. Actually, it was very hard not to get a grade 1 because some of the questions in the final exam included, When did the Second World War take place?

DO YOU HAVE A FAVOURITE CUP OR MUG? CAN YOU DESCRIBE IT?

It’s a cup that says, I Love Daddy alongside some high flying monkeys. I don’t know which of my three daughters bought it for me so I’ll assume it’s from all three of them.

WHAT WAS YOUR MOST ADORED CHILDREN’S BOOK? AND CHARACTER?

From the Charlie & Lola series, Soren Lorenson is my favourite character. He exists as a figment of Lola’s imagination and is always to blame when Lola does anything wrong.

WHERE DO YOU LIKE TO WORK BEST – IS IT AT A DESK, IN AN OFFICE OR IN A COFFEE SHOP? AND WOULD YOU SEND US A PICTURE OF WHERE THE MAGIC HAPPENS?

Mostly I work from the kitchen table so I have a view of the garden and the sky.

AND FINALLY, WHERE CAN THIS CAFFEINE-FUELLED AUDIENCE FIND YOU?

You have successfully been subscribed!
Get the best content from Converge direct to your inbox every month.
I need a Copywriter

Need a copywriter? Haydn Grey is a B2B copywriting agency, working with multinational brands. We write copy that engages, persuades and converts your readers into loyal customers. Whether you're looking for website copy, a video script, a white paper or internal comms support, we write for businesses and industries around the world. Want to write better copy? We also offer training days that teach you how to write to sell. They're good fun too. Ready to know more? Call us today