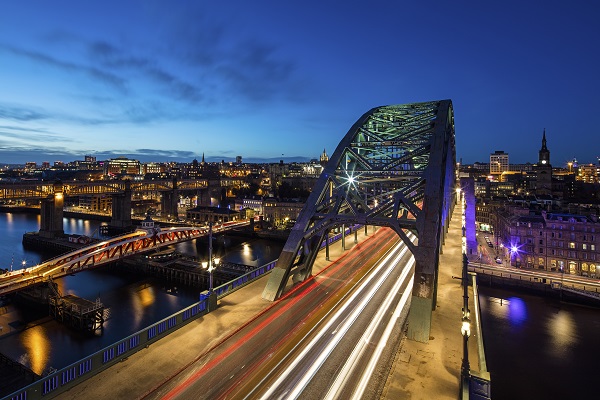 Consisting of new foreign direct investments and expansion projects from existing foreign-owned companies across the region, DIT’s statistics record that the North East LEP area attracted 5,495 new jobs in the year April 2021 to March 2022 – the highest number of inward investment jobs for any area outside of London. When the figures are calculated as a proportion of population (to compare small against large regions), the North East attracted proportionally nearly 50% more jobs than London.

When UK companies moving to the North East are included in the figures, more than 8,500 inward investment jobs were attracted to the North East last year – the most successful year to date for the team at Invest North East England (INEE). These figures relate to the area covered by INEE – Northumberland, Tyne and Wear and County Durham (North East LEP area).

This is a huge regional achievement shared among INEE, the region’s two combined authorities and seven local authorities and the Department for International Trade (DIT) who collectively have supported a large proportion of investment projects.

It has been an outstanding year for inward investment success in the North East – especially around the electrification sector – with US company Turntide Technologies investing £100m in acquiring Hyperdrive, Borg Warner Gateshead Division and Avid Technology. Envision AESC is currently building a new gigafactory at the International Advanced Manufacturing Park near Nissan, and, although not included in last year’s figures, Britishvolt is planning to create 3,000 new jobs at Cambois, Northumberland when its gigafactory is completed.

Other standout North East investments include Saietta Group, an AIM-listed green engineering firm, and global giant Just Eat creating 1,500 jobs in customer service and HQ roles, both expanding into Sunderland. There has also been an influx of over 500 digital jobs to Newcastle due to the expansion of four global technology companies – Thoughtworks, Arctic Wolf, Version 1 and Monstarlab. Global e-commerce powerhouse, Amazon, recently moved into its huge new base at Follingsby Max, Gateshead, creating over a thousand jobs for local people.

The region’s offshore wind sector, world-renowned for its innovation and world leading technologies, continues to grow and the announcement that JDR Cable Systems will build a new facility in Northumberland to manufacture offshore wind farm cable, only strengthens the region’s reputation in the sector. The fact that JDR’s investment, along with the SSE/Equinor O&M facility at Port of Tyne, also in offshore wind sector, are not included in last year’s figures points to a further buoyant year for inward investment success in the region in 2022/23.

Additional expansion projects are well underway across the North East with international alarm specialists Verisure, which employs nearly 500 people in North Tyneside, set to relocate into larger premises following significant growth. Nissan has announced plans to create a flagship £1bn electric vehicle hub to coincide with the production of a new all-electric model in Sunderland.

“Once again, the North East has punched far above its weight and has capitalised on positive growth to attract a range of transformative inward investments into the region. Last year, we created over 8,500 new jobs in the region while safeguarding many more roles despite a massively uncertain time for business across the world.

“The exceptional flows of inward investment into the North East over the last year shows the region’s commitment and drive to grow the local economy and further strengthen our position as a leading destination for global business. This result is a testament to the hard work and forward-thinking that is going on here in the region.”

Emerging as a UK frontrunner in key sectors such as electrification, offshore wind, cutting-edge digital and immersive technologies, vibrant smart cities plus modern-day life sciences, business services and advanced manufacturing industries, the North East has become the go-to region outside of London for many dynamic 21st-century sectors.

Guy is thrilled at the collaborative effort from local partners to attain this milestone and is already looking forward to releasing details on new INEE projects that are currently in the pipeline.

“INEE together with regional and national partners, have been working on a number of these projects for many years and I am thrilled to see them now coming to fruition. A huge well done to everyone involved.

“We have some very exciting projects in the pipeline from various sectors including electrification, offshore wind, fintech and satellite components.

“With new development land and office space at NETPark and Millburngate in Durham, new speculative industrial builds at Tyne Tunnel estate in North Tyneside, the award-winning £42m City Hall and The Beam including tenants such as Ocado at Riverside Sunderland, the completion of Newcastle Helix office buildings of The Lumen and The Spark and visionary plans commencing at East Pilgrim Street, there is a wonderful array of vibrant projects shaping our region.

“The future of the North East is looking bright, and we are well on track to create thousands of new and quality jobs over the next few years.”

“Local authorities across the North East have had to face more than their fair share of challenges over recent years however the fact that the region’s economy continues to go from strength to strength is evidence of just how attractive a proposition this extraordinary part of the world can offer businesses seeking to relocate in order to innovate and grow.

“From the International Advanced Manufacturing Park (IAMP) which will house Nissan and Envision’s £1billion Gigafactory to Durham’s Integra 61 scheme, Riverside Sunderland and Newcastle’s Pilgrim Quarter, there are so many superb developments currently underway that it is no surprise that the North East is now outperforming the rest of the UK when it comes to securing inward investment and hopefully this is a trend that continues as we look to the future.”

“Our region’s growing reputation on a national and international stage has continued to attract new and expanding businesses to the North East, creating more and better jobs for local people and building a stronger and more competitive regional economy.

“The North East is a hive of world class skills, especially in emerging industries like advanced manufacturing, renewable energy, digital and tech, and health and life sciences. Because of this, and our existing infrastructure of Grade A office accommodation, global transport links, and unrivalled quality of life, businesses want to be based in North East England so they too can benefit from our amazing regional assets.”

“The North East pulled together when we needed to during the worst days of the pandemic. When we work together we can thrive as we recover, creating jobs and opportunities for everyone. The right inward investment helps us to build an economy that leaves no one behind.”

INEE has been at the forefront of many of these positive developments, acting as the first point of contact for companies and enterprises looking to locate and invest in the region. The team markets the region to potential investors, connects businesses to the region’s networks of specialist organisations, and provides the information, support and advice essential for businesses looking to locate in North East England. INEE also works closely with DIT to ensure the region’s key investment opportunities and assets are promoted internationally.

You have successfully been subscribed!
Get the best content from Converge direct to your inbox every month.
Visit Site