His ‘understated way of working’ that ‘really packs a punch’ has earned Paul McEldon national recognition for his work to support the North East business community. 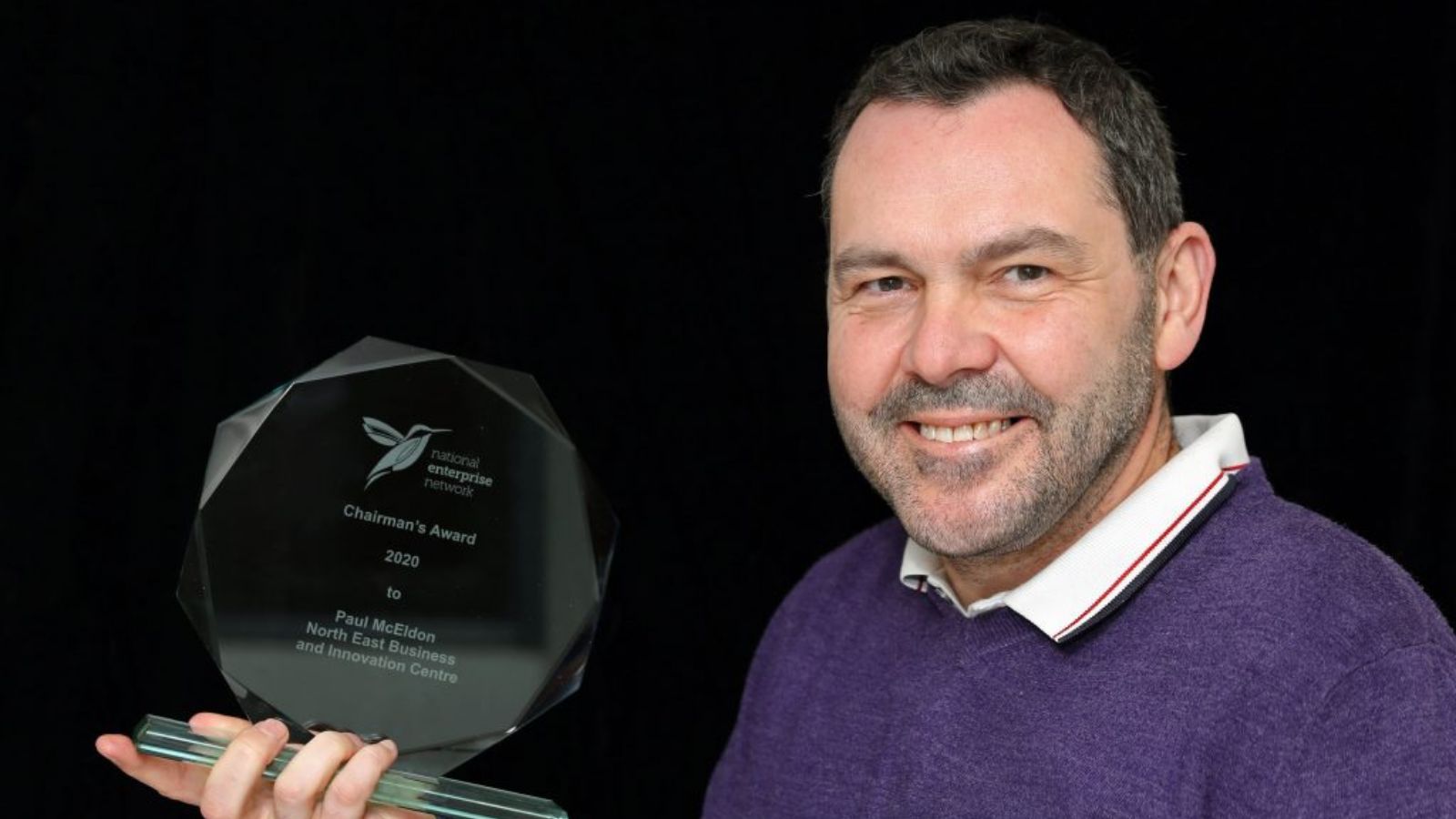 True to form, the Chief Executive of the North East Business and Innovation Centre (BIC) said he was taken completely by surprise to find his collaborative approach had led to a special, Outstanding Contribution Award from the Chairman of National Enterprise Network.

He received the news live on Zoom in the living room of his home, where he’d been taking part in a Covid-friendly version of the Network’s annual national conference and National Enterprise Awards ceremony.

He said: “It was the last business of the day and I had no idea whatsoever that this was coming. It was quite overwhelming.

“I’ve attended the awards every year for the last 20 years or so and the handful of people who have received this discretionary award are instantly recognisable in the sector for their commitment and achievements. It’s very humbling to be considered in the same league.

“There were several written statements submitted from the CEOs of the nine enterprise agencies in the North East, which I found especially humbling, knowing what all of us do to try to help individuals and businesses start and grow and realise their dreams.”

The awards are a special highlight of the calendar for Paul, who says they provide a chance for everyone working in the enterprise support sector to see what’s new and evolving and create links with other like-minded individuals.

The ceremony is organised by national small and micro business support association National Enterprise Network in recognition of the work of the sector during the most challenging year businesses have faced.

“Since his appointment, Paul has injected fresh thinking into establishing the BIC as a primary regional player in the fields of incubation, innovation and business support. In addition, he has been Chair of the Board of North East Enterprise Agency (NEEAL) Ltd for over ten years and continues to be a driving force behind them.

“NEEAL was set up in 2008 as a unique collaboration of nine award winning enterprise agencies to support businesses across the North East of England and was established to make sure there was regional coverage of enterprise and business support services.

“All of this has been delivered under guidance, direction and support of Paul. His colleagues on the NEEAL Board have individually fed back their thanks for his support. There is certainly a huge amount of respect for the work that he does.”

One of the comments read: “Paul has a very understated way of working, a quiet style that really packs a punch! He is a fantastic collaborator, a trusted partner with a high level of integrity which makes him highly effective at driving the enterprise agenda.

“He has clear vision, coupled with intuitive action, which makes a significant impact across a wide range of partnerships. He’s a real unsung hero.”
You have successfully been subscribed!
Get the best content from Converge direct to your inbox every month.
Visit ne-bic.co.uk

The North East BIC is more than just a business park, it's a bustling community offering the ultimate location for SMEs in the region to locate and grow. Dedicated to supporting companies, the BIC offers flexible and affordable office, lab and industrial space alongside access to a wide range of events and advice to start and scale your business. Take a look at our latest video to see what our customers had to say about us http://www.ne-bic.co.uk/bic-showcase-video/