In a new series of features we showcase some of the region’s leading accountants. This month we kick off with Cyd Smith, owner of CS Accounting. 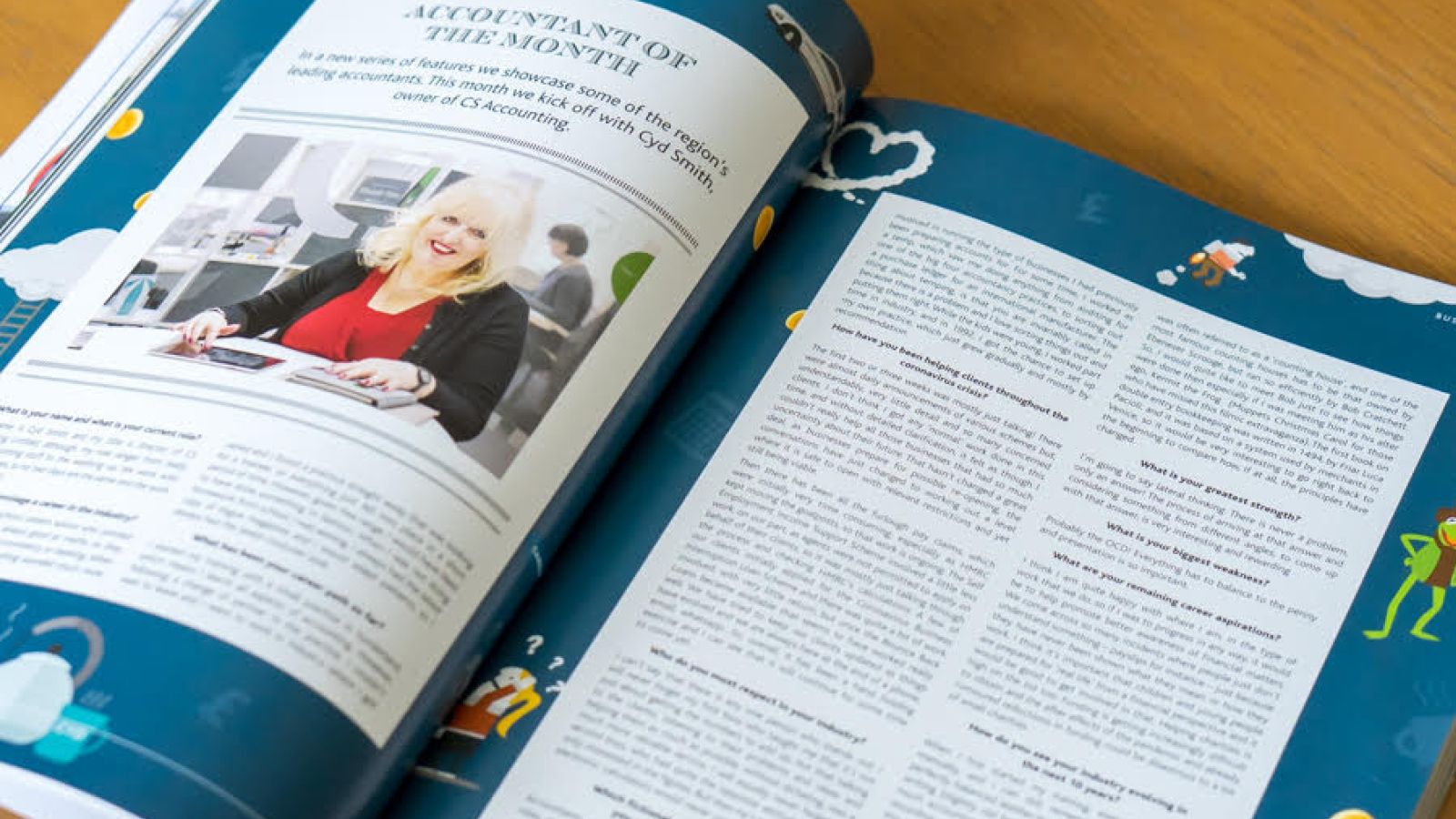 My name is Cyd Smith and my title is director of CS Accounting Limited, although, my role ranges from really clever accounting stuff to the washing up. We work with small businesses, so no two days are the same and the work is certainly varied.

Did you always envisage a career in the industry?

No, I didn’t. It was the school careers advice who pointed me in this direction. I was always good at maths, so they suggested a career in either accountancy or banking. When I went for the interviews, accounting sounded much more varied and I found a practice straight away that was looking for a trainee, so everything just fell into place in a short period of time. However, given free range, I would have liked to have done something in fashion. When I was not doing homework from school, I was sewing. I always had the latest copy of Vogue magazine and I would adapt patterns, so I always had the latest couturier look.

What has been your career path so far?

I started my training with a small practice in Sunderland, which meant I learnt all aspects of accounting. However, following a change of partner in the practice, I couldn’t wait to leave and I went to work in industry, where I got involved in running the type of businesses I had previously been preparing accounts for. For some time, I worked as a temp, which saw me doing anything from auditing for one of the big four accountancy practices, to sorting out a purchase ledger for an international manufacturer. The thing about temping, is that you are invariably called in because there is a problem and I love sorting things out and putting them right. While the kids were young, I worked part time in industry, and in 1992, I got the chance to set up my own practice, which just grew gradually and mostly by recommendation.

How have you been helping clients throughout the coronavirus crisis?

The first two or three weeks was mostly just talking! There were almost daily announcements of various schemes but, understandably, very little detail and so many concerned clients. I don’t think I got any ‘normal’ work done in this time, and without detailed clarification, it felt as though I couldn’t really help all those businesses that had so much uncertainty about their future. That hasn’t changed a great deal, as businesses prepare for possible re-opening, the conversations have just changed to working out a level where it is safe to open with relevant restrictions and yet still being viable.

Then there has been all the furlough pay claims, which were initially very time consuming, especially as HMRC kept moving the goalposts, so that work is ongoing. The Self Employment Income Support Scheme involved a little less work, on our part, as agents were not permitted to apply on behalf of their clients, so it was mostly just talking through the process and checking HMRC’s calculations. A few of our clients initially applied for the Coronavirus Business Interruption Loan Scheme and there was quite a bit of work involved, with very little return, but once the Bounce Back Loans became available that seems to have worked really well. We have tried to keep our clients updated as things have evolved and we are always here at the end of a phone, email, WhatsApp…So, overall, it has been a hand holding exercise and I can see that it will continue for some time to come yet.

Who do you most respect in your industry?

I can’t say that there is any one person who stands out. I will never forget my first boss who taught me that it’s not just about getting the numbers to add up, but that talking to the clients, listening to their problems and ideas and helping them as much as possible, without dictating, was a much more valuable service. I will equally never forget my second boss, who had quite the opposite attitude and was only interested in the figures. But then he’s the guy who said electronic calculators would never catch on…

Which fictional accountant would you most like to meet?

Accountants don’t seem to have many starring fictional roles; they tend to be portrayed as boring grey suits, not realistic at all! In the 19th century, an accounting practice was often referred to as a ‘counting house’, and one of the most famous counting houses has to be that owned by Ebenezer Scrooge, but ran so efficiently by Bob Cratchett. So, I would quite like to meet Bob just to see how things were done then especially if I was meeting him as his alter ego, Kermit the Frog (Muppets Christmas Carol for those who have missed this filmic extravaganza). The first book on double entry bookkeeping was written in 1494, by Friar Luca Pacioli, and it was based on a system used by merchants in Venice, so it would be very interesting to go right back to the beginning to compare how, if at all, the principles have changed.

What is your greatest strength?

I’m going to say lateral thinking. There is never a problem, only an answer! The process of arriving at that answer and considering something from different angles, to come up with that answer, is very interesting and rewarding

What is your biggest weakness?

Probably the OCD! Everything has to balance to the penny and presentation is so important.

What are your remaining career aspirations?

I think I am quite happy with where I am, in the type of work that we do, so if I was to progress in any way, it would be to help promote better awareness of financial matters. We come across so many incidents where people just don’t understand something – payslips for instance – just because they have never been shown what they mean or how they work. I think it’s important that children and young people are prepared for ‘real life’ from a financial perspective and it would be good to get involved in that. Helping charities is high on the list too. Funding is getting increasingly difficult to obtain and the after effects of the pandemic and already rumoured reductions in funding could be disastrous to a lot of small charities.

How do you see your industry evolving in the next 10 years?

When I first started my training, everything was done manually, and I can still remember a client who had perfectly balanced leather-bound ledgers, with copperplate writing (slightly old fashioned even then). There is now so much accounting software and so many apps, the actual recording process has been made very easy for anyone and this is evolving constantly. I have no doubt there will still be some clients who don’t feel confident enough to use all of these products and there will still be the compliance work which will probably reduce as the technology progresses. But the main role is increasingly about the advisory services, helping the client to understand the figures, what to look for as signals for anything going well or not so well and how to present the business to their clients or to other parties to make the most of what they are doing. This recent situation has proved how important that can be and as businesses start to re-open and re-model to suit the conditions it will be extremely relevant.
You have successfully been subscribed!
Get the best content from Converge direct to your inbox every month.
Visit Converge

We just love numbers. Accounts, tax, payroll or planning we aim to help small businesses to be successful. But it's not just about getting the numbers to add up. We aim to support our clients as much as they need with accounting packages designed to suit your business, face to face and in the cloud. Pop in for a chat, the kettle's always on.