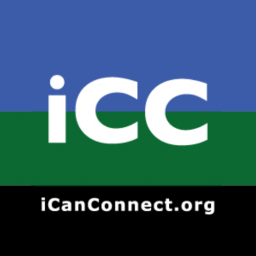 Dallas Bauer loves his parents, Jackie and Scott. The nine-year-old Hastings, Minnesota boy feels most comfortable when he can get in touch with them at a moment’s notice. Dallas has CHARGE syndrome and communicating can be a struggle. 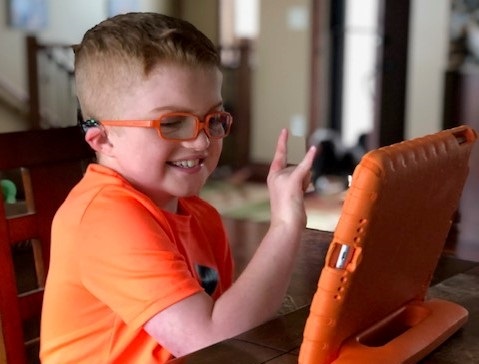 Dallas Bauer loves his parents, Jackie and Scott. The nine-year-old Hastings, Minnesota boy feels most comfortable when he can get in touch with them at a moment’s notice. Dallas has CHARGE syndrome and communicating can be a struggle. In the past, Dallas couldn’t communicate with his parents as much as he wanted (or needed) to. “We were really frustrated with the old technology Dallas was using because it didn’t have cellular capabilities,” says his mom, Jackie Bauer. “He couldn’t get in touch with us when he wanted to during the day and he was having a hard time.”

Last year, Jackie learned about iCanConnect through the Minnesota DeafBlind Project and helped facilitate the application process for Dallas. After he was accepted into the program, a local Minnesota iCanConnect representative visited Dallas in his home and assessed his distance communication needs. Based on the assessment, he received an iPad through the program.

Now Dallas can get in touch with his parents whenever he wants. He attends school 45 minutes away and uses his iPad to communicate with his mom during the long trips to and from school. “Dallas needs the perfect good-bye before he leaves for school,” says Jackie. “If he didn’t get a good enough goodbye from home, there were times his transport had to come back so we could try again. But since Dallas received his iPad through iCanConnect, he uses it to FaceTime with me from the bus on those difficult days, and he hasn’t had to return home for a goodbye since!”

Dallas uses his iPad to stay connected with his parents throughout the day – not just when he’s on the bus. “He uses the voice-to-call and the voice-to-text features a lot to check-in and say, ‘I love you’ or ‘I miss you today, mom’,” says Jackie.

Dallas also enjoys connecting with others who play Minecraft, a virtual adventure game. Using his iPad, he communicates through the game’s chat feature, enabling him to work together with his fellow players. “He communicates, builds, and trades worlds in Minecraft,” says Jackie. “He really enjoys playing with his family and friends, which is something he couldn’t do not too long ago.”

Another hobby Dallas enjoys is taking photos and videos on his iPad and sharing them with his family and friends. “Dallas especially loves to share his pictures and videos with his grandparents,” says Jackie. “He gets real enjoyment from it and it’s another way for him to communicate with those who are important to him. iCanConnect has been incredibly positive in Dallas’s life,” she continues. “It’s a great program and I’m so glad we found out about it. I will continue to recommend it to others.”

For more information about iCanConnect, or to see if you or someone you know qualifies for the program, visit www.iCanConnect.org. Find your local contact to apply.

iCanConnect is a national program with local contacts in all 50 states, District of Columbia, Puerto Rico, the U.S. Virgin Islands, Guam, American Samoa, and the Northern Mariana Islands. Established by the Federal Communications Commission (FCC) in 2012, iCanConnect provides qualified individuals who have both significant vision and hearing loss with free distance communication equipment and training to help increase access to modern communications. To learn more about iCanConnect, visit www.iCanConnect.org.

You have successfully been subscribed!
Get the best content from Converge direct to your inbox every month.
Learn More

iCanConnect provides qualified individuals who have both significant vision and hearing loss with free distance communication equipment and training. The program helps reduce isolation, increase independence, and maintain access to important information for these individuals.