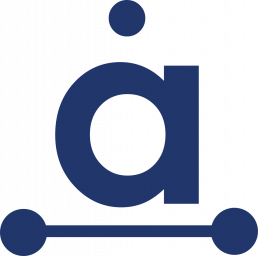 In this blog, we’ll examine the latest and greatest in the world of sport NFTs, both apparel and athletes, to show you who is getting it right and how they’re tapping into their fan bases effectively. 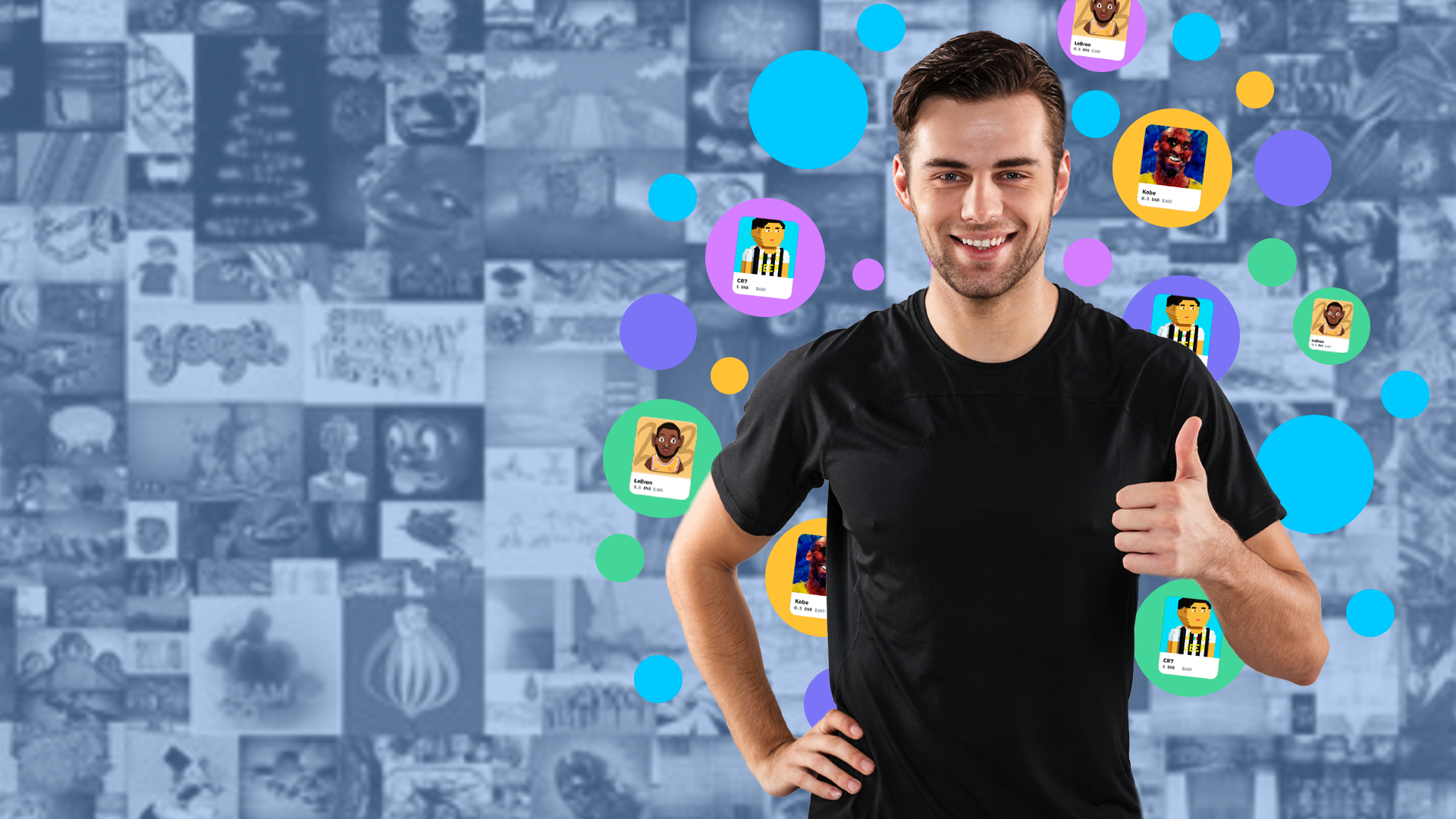 Sport and NFTs, a match made in heaven? If the number of sports brands and athletes getting into the game are anything to go by, it seems like NFTs are the hottest thing since the last New Balance sneaker drop.

The world has undergone a seismic shift and so has your average consumer. Within sport, change is being driven by the Gen Z audience, as they innovate the way we engage with our favorite brands, platforms, and each other. According to a recent report into sport fans:

If you’re not down with the lingo, NFT stands for non-fungible token. An NFT allows you to buy and sell unique digital items and record who owns them using the blockchain. They’re often associated with photos, videos, audio and items in video games.

They’re also fast becoming an effective way of engaging with fans and they’re worth serious cash. For example, the NBA’s Top Shot (which we’ll get to a little later) made $219 million in February 2021. The one constant that the sport industry needs to remain fixed on to ensure sustainability and growth is the consumer. So how exactly are sports brands using NFTs to put consumers at the heart of their strategy?

In this blog, we’ll examine the latest and greatest in the world of sport NFTs, both apparel and athletes, to show you who is getting it right and how they’re tapping into their fan bases effectively. P.S. Don’t forget to bookmark this and share it with your friends.

Who are the key players in the NFT conversation?

Before we kick off our conversation around which brands and athletes are winning the NFT game, let’s spend some time understanding who the key players are in driving the interest and conversation. We ran a report specifically examining sport apparel & NFT fans, which gave us a clearer picture of your average sport and NFT crossover audience.

To date, the audience is over 90% men and skews very young, with nearly 45% of the audience being aged between 18 and 24 years old. As the Nielsen report suggested, Gen Z are busy innovating in the sport sector.

Unsurprisingly, 93% of the audience are passionate about sport, and 60% of them are based in the US. Looking at their online profiles, this audience self-identifies as ‘sports’ and ‘fan’. It’s also worth noting that many of them feature ‘basketball’ in their profile, suggesting a strong crossover between NFTs and that particular sport.

If you’ve read a few of these spotlight pieces, we probably don’t need to remind you that your audience is not a monolith. Audience intelligence is our entire playbook, so let’s break this massive sport audience into some distinct segments 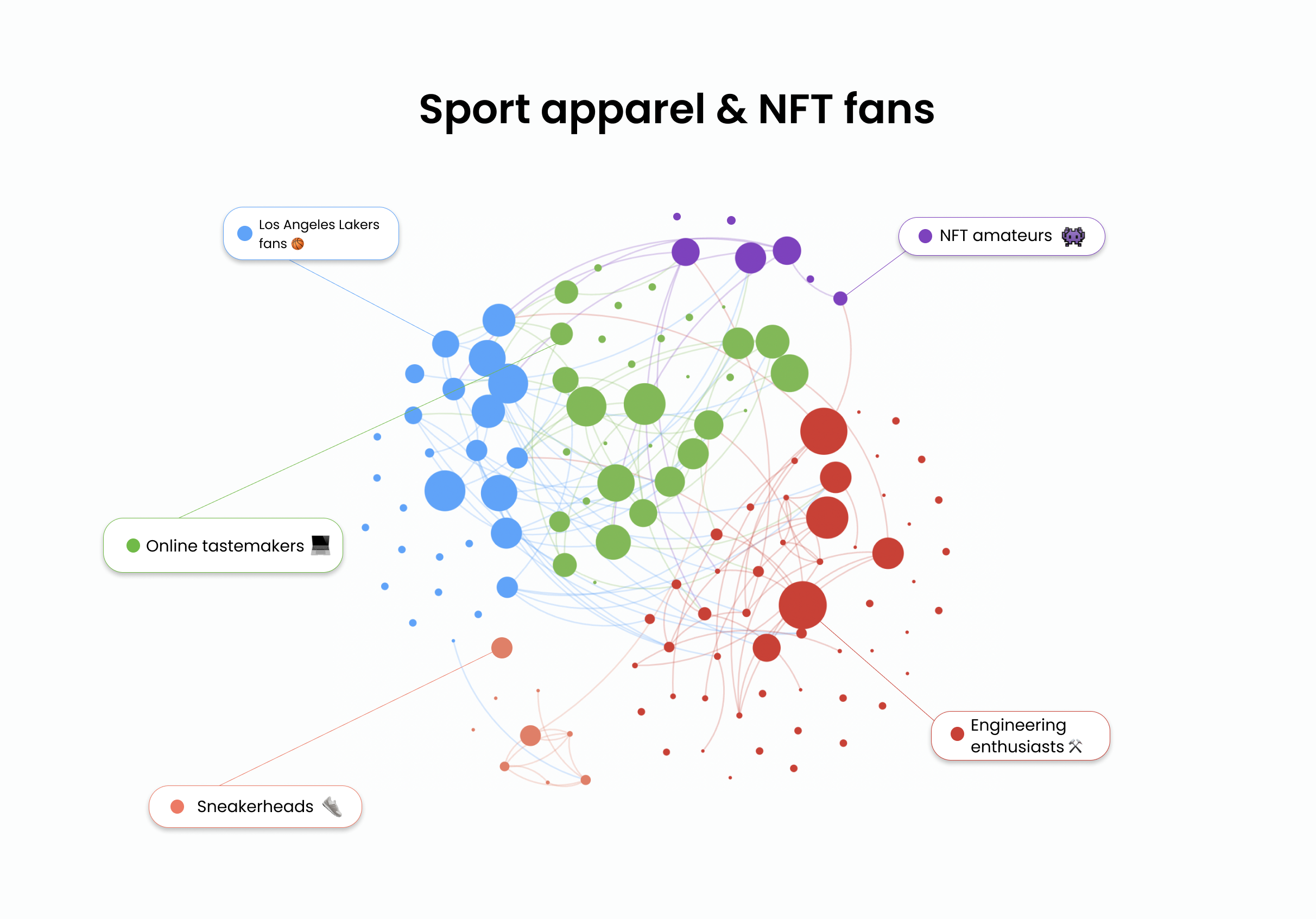 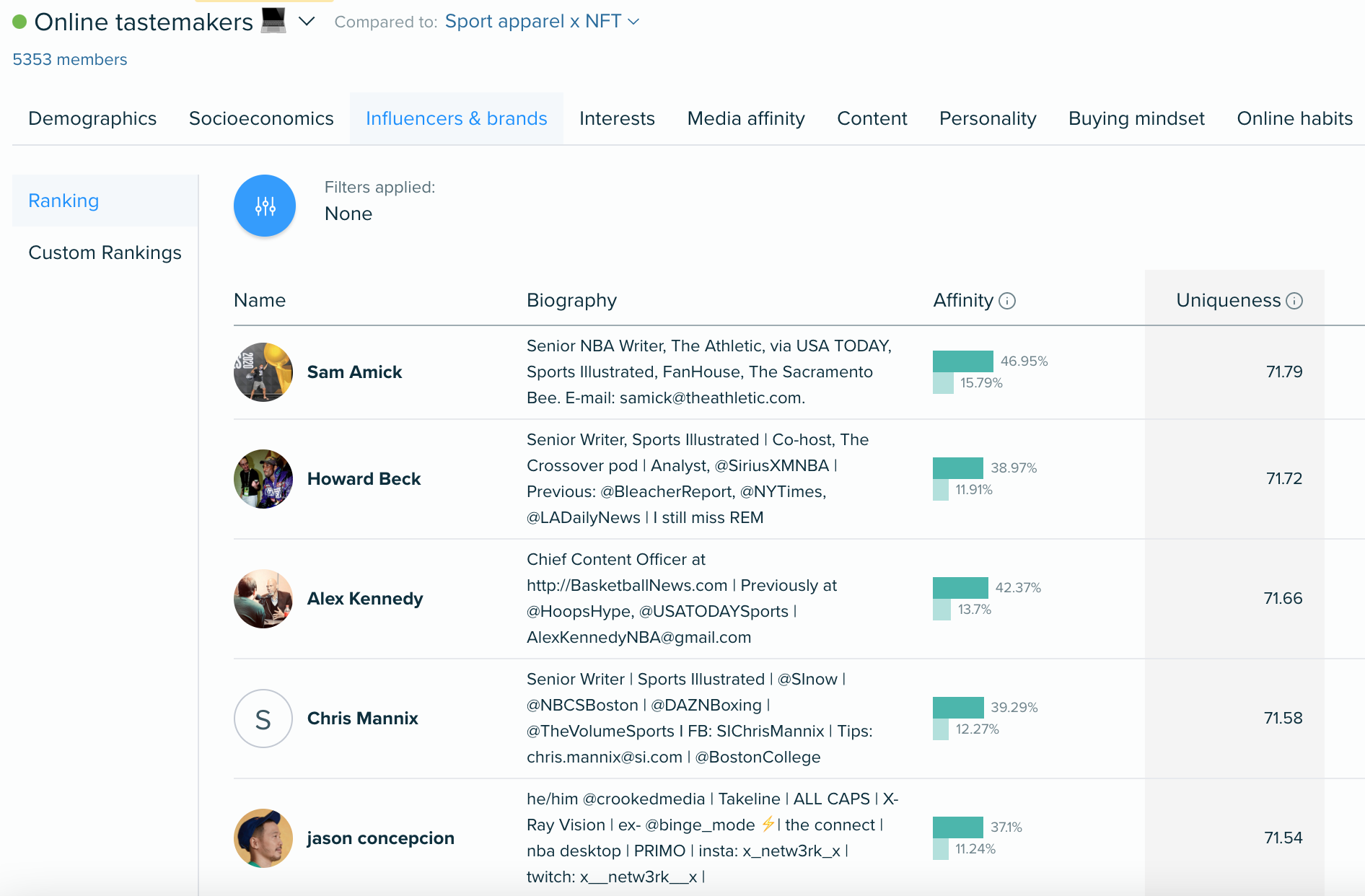 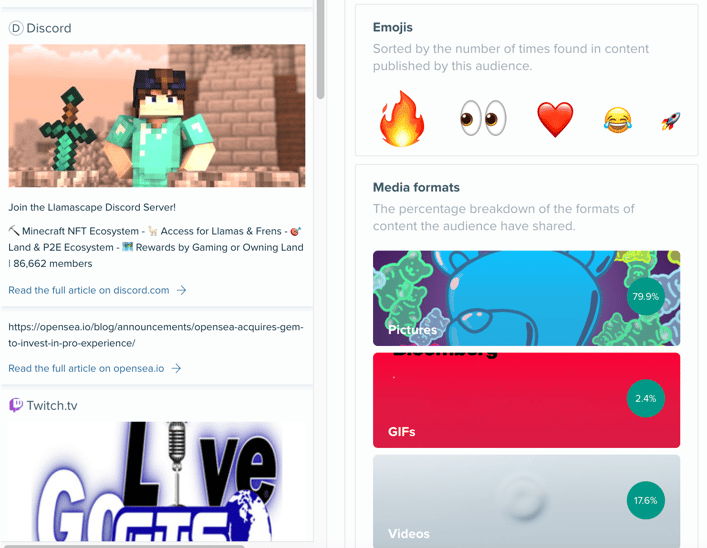 Which sport brands are switching up the game with NFTs?

We’ve invested our time in examining the sports and NFT crossover audience, now let’s get to the good stuff – brands that are absolutely killing it.

The NBA are far and away the most engaged brand dabbling in NFTs. An honorable mention has to go to the NBA Top Shot, which acted as a gentle introduction for many sports fans into the virtual world of NFTs. As of March 2021, 800,000 Top Shot accounts were registered and $500 million worth of NFTs had been sold through the platform.

According to The Verge, fan Jesse Schwarz set an official NBA Top Shot record by buying the most expensive NFT on the platform, a $208,000 clip of a famous LeBron James dunk.

The NBA are offering fans the chance to buy what they’re calling Moments – which essentially function as trading cards for grown-ups. NBA fans can buy packs of Moments which feature video clips of specific plays, as well as stats about the game the Moment came from, and the players featured.

NBA Top Shot taps into two factors that drive this audience: their love of the sport and their love of collectibles. Sticker books may be a thing of the past, but NFTs collectible cards are forever (sort of, we don’t really know yet).

It brings an air of gamification and exclusivity to the USA’s second favorite sport and gives fans a new way to interact with the brand, their favorite players, and each other. The Community section of the website speaks to this, with Top Shot collectors ranked and searchable, alongside their Discord and Twitter profiles to carry on the conversation.

Adidas Into The Metaverse

From much loved sporting leagues to much loved sporting apparel, brands like Adidas wasted no time making their way into the metaverse. Quite literally. In December 2021, they launched their Into The Metaverse NFT collection, of which all 30,000 NFTs sold out within a matter of hours which earned the brand approximately $22 million in sales.Adidas Into The Metaverse.

They kicked off the excitement with a tweet on 16th December, announcing their official partners – Bored Ape Yacht Club, Punks Comics, and GMoney (a pseudonymous crypto enthusiast) – and launching their official app.

It wasn’t just digital goodies up from grabs. A purchase of their limited edition Into The Metaverse NFT was also linked to exclusive physical merch such as the hoodie and tracksuit worn by Adidas’ Bored Ape NFT, and yet-to-be-announced digital experiences. They also played on their audience’s preferred social networks, launching a dedicated Discord channel for collectors to chat and connect.

With Adidas claiming that is just the beginning of their venture into NFTs, it will be interesting to see how they play on the hardcore enthusiasm of the sneakerhead audience to build on rarity, exclusivity, and community.

It’s not just retail brands cashing in on NFTs, athletes are also helping themselves to a piece of the action. A notable example of this comes from Luka Modrić, hailed as one of the best midfielders of his generation. Since making his debut on the pitch, he’s been a winner of five domestic league titles, three domestic cup titles, a runner-up medal at the FIFA World Cup, and named the world’s best men’s player in 2018.

Working with Dutch animation studio Visual Lab, Modrić created a collection of four collectibles, including two virtual shirts that can be worn in metaverse spaces such as Sandbox by the lucky owners. With an opening bid of $5,000 on his Submerse NFT, we’re unsure how many people have snapped up the deal, but it’s an interesting way for sports players to take ownership of their own celebrity and tap into super fans.

We also saw this example from Julian Edelman (though admittedly, it was announced on April Fool’s Day), who created comic inspired NFTs of his classic moments on the football field. Created with creative agency and studio Superdigital, these NFTs are peak creativity. According to founder of Assaf Swissa: “It seems like everyone famous might get into the NFT game… the more that people who have large influence are making NFTs, the more we are going to see a creative cultural shift.”

How can brands take home the NFT trophy?

We’re seeing lots of creative examples of NFTs in the sports industry, but how can you get in on the action and importantly, promote it well? We’ve compiled some top tips from these campaigns to ensure you make the most of NFTs in marketing.

If you want to uncover opportunities to work with influencers and reach new audiences, the data is out there. It’s just a matter of taking a deep dive. With tools like Audiense, conducting in-depth audience analysis and discovering actionable takeaways is possible for brands that want to approach their marketing strategy with confidence.