In this, the first of our Meet the Charity Series, we put some questions to representatives of MS Research and Relief Fund, Amy Dunn and Dan Nelson to offer an insight to what makes the charity work. 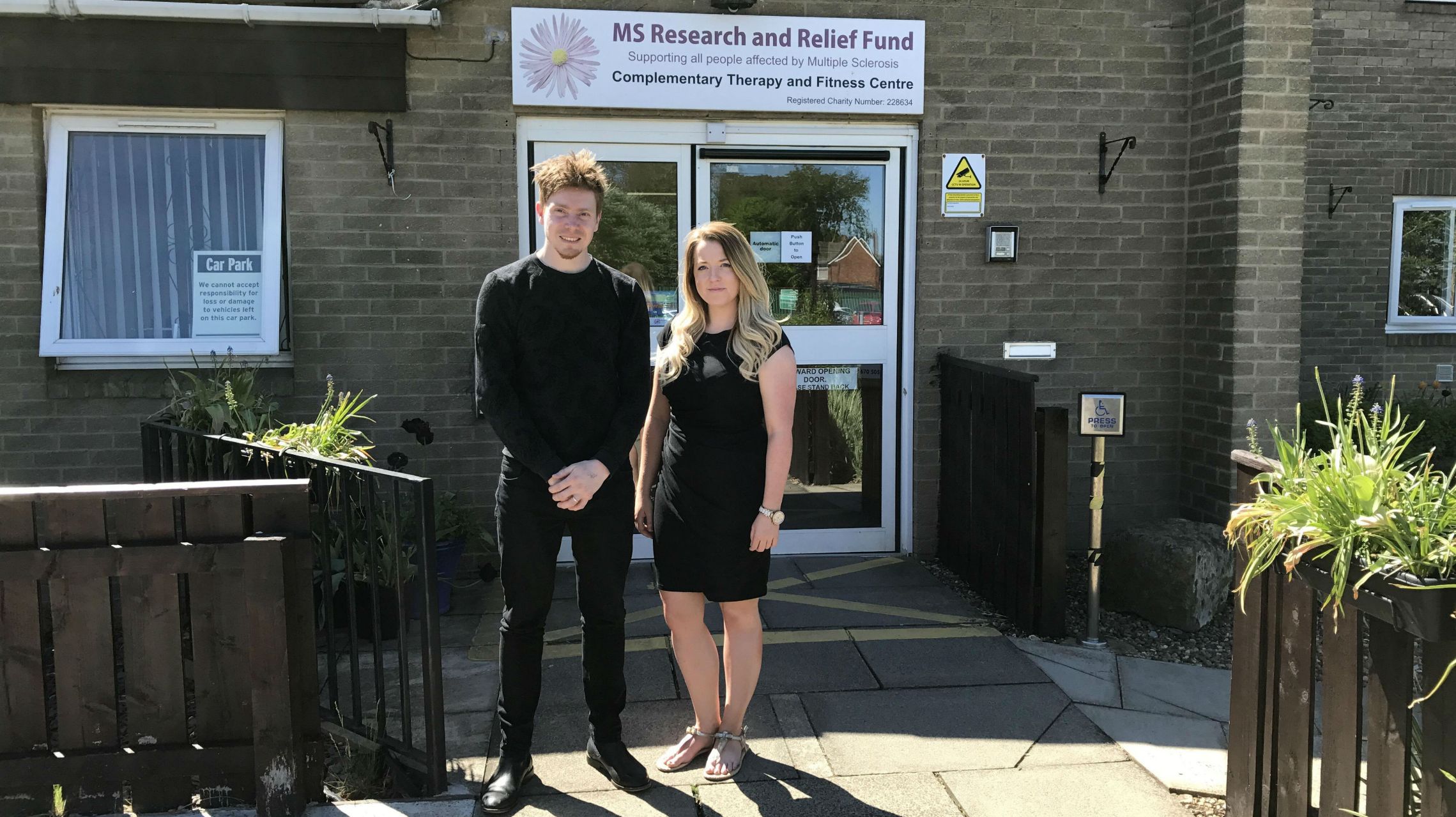 MS Research and Relief Fund is a charity based in Morpeth which supports those with MS, their families and friends.The head office is based in Morpeth, but the charity has outreach centres across the North East to serve their 1000 registered service users with advice, free classes and therapies, along with grants which provide access to specialist equipment designed to make their lives easier.

Having previously trained as a massage therapist, Management Assistant Amy Dunn took her expertise to the charity eight years ago where she discovered how much of a difference MSRRF made to the service users’ lives. This inspired her to take a more involved role at the charity, and she now assists Charity Manager Diane Charlton in processing and administering the Charity’s finances as well as grants, for people with MS.

Dan Nelson has been a professional fundraiser for around 10 years and has previously worked for Marie Curie Cancer Care in London, as well as another role in America where he lived for a year. He relocated in January 2016 and took the role of Fundraising Manager at MS Research and Relief Fund, bringing with him a wealth of different fundraising ideas and strategies.

Are there any misconceptions about what you do?

Dan – Normally when I say I do fundraising people normally say “oh what you’re collecting money in buckets on the street?” and that sort of thing, so I explain there’s a lot more to it than that. We work with different corporate partners and support individuals that want to raise money for us, and we work strategically like any company would really in terms of business development and income generation for the charity.

Amy – I think because my role’s very different, they ask how we help people directly with MS, so I explain about the therapy side and about offering grants. A lot of the people ask if service users need to give the grants back, they don’t, our services are all free.

Have you seen any changes in the charity sector since you’ve worked in it?

Dan – Many aspects of it have got more competitive, particularly around challenge events. The events themselves have changed – a marathon used to be the biggest thing you could do, but now supporters expect more for their entry fee, and there’s been a move towards more social and interactive events like colour runs and obstacle courses. So charities like us have to up their game year on year whilst being mindful about what’s in the press. Organisations chasing people for money or being involved in scandals give charities a bad name and make it harder to convince people their money’s going to the right place.What sets MS Research and Relief Fund apart, is that people can come into Benmar House or one of our outreach centres and see the services we provide and the real impact it’s having; and be confident that the money is going where we say it’s going.

Amy – In the past few years a lot of the MS charities have become more willing to work with each other, which is obviously very beneficial for us as we’re a small charity. MS Society are a massive charity in comparison, but we part fund grants with them, which means we would give a pot of money and they would give a pot of money. And fundraising as well – Dan has a contact with MS Society and last year we shared their tent on the Great North Run.

Describe a typical day at MS Research and Relief Fund

Dan – Days vary quite a lot particularly when we’re coming up to an event or a campaign. Our ‘Great Benmar Bake Off’ campaign runs over six weeks so it’ll be bake off all the way. The same applies at Christmas with our ‘Morpeth Christmas Tree Festival’, so the work load varies in that regard. A typical day might start off with me meeting with my team, Jon and Hayley, for updates on particular events and we’ll discuss what the priorities and challenges are.I might go into Morpeth to meet a key stakeholder for one of our upcoming events.

We have some key local volunteers who do lots of promotional work for events and galvanise local business support for the charity, so I might have a coffee with one of them to make them feel involved and appreciated. Then I might be dealing with a large legacy that’s come in or meet with other members of staff to talk about anything which might impact fundraising. Unlike with a bigger charity where the roles are more specialised, you have to be highly proficient in many areas of work and you are always learning and developing skills. It’s always an interesting dynamic role, so it’s good, I enjoy it.

Amy – No two are the same, ever. I am involved in all aspects of the Charity’s work. I can be awarding a grant one minute and the next dealing with the Charity’s invoices. At the moment we’re visiting outreach centres to see if we can improve any of the services. We constantly look at ways to better our service and keep it cost effective but user-led.

What do you find most challenging?

Amy – My biggest struggle is that you can only help so much, even with grants. Sometimes I want to give someone the whole £10,000 they need to maybe get their downstairs wet room but you can’t. So for me, it’s having to take a step back sometimes. Although I want to change the world for them, we are a very small charity and there is only so much we can do.

Dan – We’ve got a relatively low brand awareness compared to larger charities. Most people will have heard of MS Society but they won’t have heard of us, so it’s our visibility to the wider world which is the challenge. You have to instil confidence in people before you can even have the conversation about them donating or getting involved with some fundraising activity.

We’re implementing strategy to change that with our Great Benmar Bake Off, Christmas Tree Festival, and Coast to Coast Cycle. The Coast to Coast Cycle has attracted people who are interested in cycling, not necessarily our charity. But we can talk to them about what we do when they come in for the event and make them a lifetime advocate. We’re improving our social media with my two colleagues Jon and Hayley who are a little bit younger and they’re more in touch with the younger, digital audience than I am, so we’re putting into place all the elements that will hopefully bridge the gap and give us that better brand awareness.

Amy – I used to give to charities anyway but you don’t really know where the money goes, whereas when you come in here you can actually see where it goes. People always leave after accessing our services a lot happier than when they arrived, so just being able to help and to see the difference that you can make is what I like most.

Dan – I like the team spirit and the trust amongst all the staff here. I have autonomy and our team has autonomy to shape the direction of our strategy and events, with agreement from Amy, Diane and the Trustees on bigger things, obviously. But essentially we’ve got freedom, they believe in us and we believe in them.

You can see people are committed and that’s proved time and time again, whether that’s a staff leaving day where everyone mucks in or where staff will come down and volunteer out of office hours so an event can be successful. You can see the genuine enthusiasm about the work and the charity and that resonates around all the staff.

What have you learnt from working in a charity environment?

Amy – It was lovely working in a spa giving massages to make people feel better but doing it for a charity is so much different. You become a good listener to service users and so as well as doing the massage you become more of a friend. You help with day-to-day issues, like if they have a bad back, they’ve got pain in their legs or they’ve not slept for weeks.

Being able to do something that’s going to improve their lives was massively different for me, so when I got offered work with the charity permanently I was delighted. We are such a small team so being able to have a complete overview of the whole charity and be involved in most of its varying work keeps my role fresh and interesting.

Dan – I like being in this environment and working with people that are really motivated to do a good job. I work with new people all the time who are always super passionate and I like feeding off that and that kind of buzz of doing this sort of work. It restores your faith a bit in humanity when you look at the news and things you might have seen or heard or come across in your life. You realise there’s good there and it’s nice to be surrounded by it.

You have successfully been subscribed!
Get the best content from Converge direct to your inbox every month.
visit website